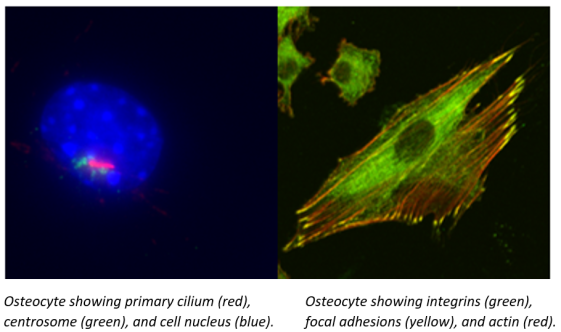 Bone is known to adapt to its mechanical environment. It has been shown that cells of the osteoblast lineage (osteoprogenitors, osteoblasts, osteocytes) are capable of transducing mechanical signals into biochemical stimuli. Osteocytes are the most numerous cells in bone and have long been regarded to be the primary mechanosensitive cells in bone, due to their extensive communication network facilitated by cell processes that extend to other osteocytes and osteoblasts. While the precise mechanism by which bone cells sense mechanical stimulation is unknown, specific mechanosensors are known to play a role. These mechanosensors include stretch activated ion channels, gap junctions, primary cilia, and integrin (as seen in the above images).

Prof. McNamara’s research group investigate the mechanosensors found in different bone cells in vivo and also seek to understand if these same mechanosensors are found in vitro. Next different cell culture conditions are used to mimic disease states, such as osteoporosis, so that the effects on these mechanosensors can be studied. To study the effect of mechanical stimulation on MSCs, osteoblasts and osteocytes in vitro in 2D and 3D environments, we employ the use of specialised bioreactors, as seen below.

In particular, we use fluorescent-based imaging and electron microscopy to identify various mechanosensors both in bone tissue and in cell culture. We aim to understand the role these mechanosensors in specific mechanotransduction pathways by means of qRT-PCR, Western blot, and ELISAs.